What’s it like to grow, trees of the years?
From start to finish, I understood
you can only be watered by tears,
and are made of wood
so flame burns you with ease,
so even a half-blind eye sees
you are burning, trees,
trees of many years.

In you, the beasts could hide,
in you was the happiness denied
to me by the merciless lion tamer. In you
went everything I had. From you
comes spring water, from you
comes morning which dawns, in you
the sun goes down to dust
trees, years, full of rust!

If I could look a little longer at least,
could look straight up at the heavens and stare,
watching the clouds as they turn red.
Let a feast begin, and at that feast
let my liberty hand me wine.
Don’t let that thing tear apart my bed,
that thing I wanted so to repair
with these twenty-two years of mine! 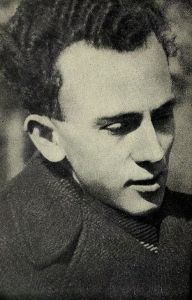 Forbidden by anti-Jewish laws to publish his poetry, Czech poet Jiří Orten tried to publish his poems under a pseudonym in the early years of World War II. In 1940, the Nazi authorities tracked the false names back to him and prevented his work from circulating in public. On August 31, 1941, he was hit by a car but was refused medical treatment because he was Jewish. He died few days later at the age of 22. Trees of the Years is thought to be Orten’s final poem.

Forward and Forward!!!
Always moving forward and forward, constantly just ahead,
Through life’s struggles, closer toward the bright sky.
Not worrying about storms, accepting wounds,
Not falling back.
Moving closer and closer.
“The old warrior of life” — engraved on his
shield.

Petr Gans was living in Plzeň, Czechoslovakia. He was sent from Plzeň to the Terezín (Theresienstadt) concentration camp on January 22, 1942. While at Terezín, Petr wrote this poem in his diary, which he then gave Michael (Misa) Grunbaum, another boy at the camp. On October 19, 1944 Petr was sent to Auschwitz, where he was murdered.

[Research note: though it’s signed “Petr Gans,” this poem is sometimes attributed to Petr Ginz, another Czechoslovakian boy who was imprisoned at Terezín (Ginz was murdered at Auschwitz at the age of 16). A comparison of drawing styles and handwriting shows these were two different boys. Czech transportation and death records support this conclusion.]