I was playing, I suppose,
when it happened.
No sound reached me.
The skies did not darken,
or if they did, one flicked
away the impression:
a cloud no doubt, a shadow perhaps
from those interminable aeroplanes
crossing and recrossing
our sunbleached beaches, Carbis Bay
or the Battery Rocks, where
all summer long we had dived
and cavorted in and out of
the tossing waters, while
the attention of the adults,
perpetually talking,
seemed focused,
unaccountably,
elsewhere.

No sound reached me
when it happened
over there on that
complicated frontier
near Geneva. (Was the sun
shining there too?)
I did not hear you cry out,
nor feel your heart thump wildly
in shock and terror. ‘Go back,’
they shouted, those black-clad figures.
‘Go back. You are not permitted to cross.’
Did the colour drain from your face?
Did your legs weaken?
‘You are under arrest,’ they barked.
‘Go back and wait.’ Back to the
crowd waiting for the train, the train. . .East?
Did you know what it meant?
Did you believe the rumours?
Were you silent? Stunned? Angry?

Did you signal to them then,
When it happened?
To the welcoming committee
one might say, on the other
side of the border.
To your husband and his friends
just a few yards away,
there, beyond the barbed wire,
beyond the notices saying,
‘Illegal refugees will be shot.’
They called across, they said,
‘Run, jump, take the risk,’
the frontier is such a thin line,
the distance so short between you and us,
between life and death,
(they said afterwards).
How was it you lacked
the courage (they said
afterwards, drinking tea).

No sound whatsoever disturbed me
when it happened.
I slept well. School
was the same as usual.
As usual I went swimming,
or raced down the hill
on my scooter or on foot
laughing with friends.
Often at night
in the dark of my bed,
I would hear the trains being
shunted down at the station,
their anguished whistling
stirring my imagination
drawing me towards oblivion.
At last, no more embarrassing letters
arrived in a foreign language
witnessing my alienation
from the cricketing scene.

Distracted and displaced
when it happened
I did not hear you ask
which cattle truck to mount,
nor, parched in the darkened
wagon, notice you beg for
a sip of water. On the third day,
perceiving the sound of Polish voices,
I did not catch you whisper to your neighbour,
‘It is the East. We have arrived.’
Nor, naked and packed tight
with a hundred others
did I hear you choking
on the contents of those well-known
canisters marked ‘Zyklon B Gas’
(It took twelve minutes, they say.)
I was not listening
when it happened.

Now I hear nothing else.

Hilda Schiff arrived in the United Kingdom as a seven year old school girl, sent from Germany with her sister Gitti (Gisela) on a Kindertransport in February 1939. In London, she was separated from her sister and was eventually evacuated to Penzance. Schiff’s father escaped Germany to Switzerland and survived the war. Hilda Schiff’s book, Holocaust Poetry, grew from her efforts to learn the exact circumstances of her mother’s death during the war. Schiff died before she could publish the book she was writing about her mother and the Holocaust. 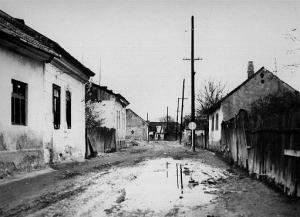 A deserted street in Sighet Marmatiei after the liquidation of the Jewish ghetto. Taken May 1944.
Image courtesy: US Holocaust Memorial Museum & Albert Rosenthal

Along with the rest of the town’s Jewish population, fifteen-year-old Elie Wiesel was confined to a ghetto in Máramarossziget (Sighet), Hungary, in March 1944 when the German army occupied the country. In May 1944, the Wiesel family was sent to Auschwitz, where Elie’s sister and mother were murdered. Elie and his father were later sent to Buchenwald, where Elie’s father subsequently died — taken to the crematorium in the middle of the night.

After Treblinka
And the spezialkommando
Who tore a child with bare hands
Before its mother in Warsaw
We see differently. 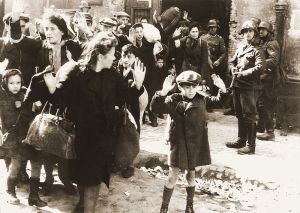 Polish Jews captured by Germans during the suppression of the Warsaw Ghetto Uprising. Photo from Jürgen Stroop Report to Heinrich Himmler, May 1943.

Edward Bond is best known as a playwright. His experimental plays, which often featured scenes of violence linked to themes of social injustice, imperialism, war, and apartheid, tested the limits of censorship and morals laws in the U.K. in the 1960s and 1970s.

Forget us
forget our generation
live like humans
forget us

we envied
plants and stones
we envied dogs

I’d rather be a rat
I told her then

Forget us
Don’t enquire about our youth
Leave us 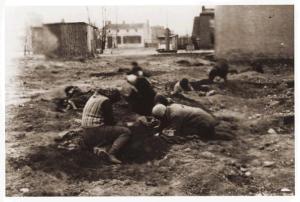 Polish poet Tadeusz Różewicz was a member of the Home Army (resistance) during World War II. Tadeusz survived the war, but his older brother, Janusz, was murdered by Gestapo in Łódź in November 1944.

British poet Karen Gershon (Kaethe Löwenthal) was born in Bielefeld, Germany in 1923. After Kristallnacht (September 9-10, 1938), she was sent to England with the Kindertransport. Her parents died in a Nazi prison camp in Riga, Latvia.

All it takes is a five-year-old in pale blue overalls drawing in a coloring book for a door to open into the light, for the house to be built again and the ochre hillside covered with flowers.

Painter and poet Max Jacob was arrested by the Gestapo in Nazi-occupied France. Though Catholic, Jacob was persecuted for his Jewish heritage. In 1944, he died in the Drancy internment camp. 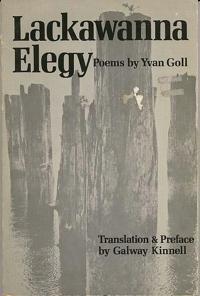 Born on the border of Germany and France, poet Yvan Goll worked in both French (Surrealist) and German (Expressionist). Worried because of his Jewish background, he fled Europe for New York at the beginning of World War II. In 1945, he returned to Paris, where he died of leukemia in 1950.

German poet Sarah Kirsch changed her first name from “Ingrid” to “Sarah” during World War II to protest her country’s anti-Semitism. After the war, she was forced to emigrate to West Germany from East Germany because of her support for banned poet and songwriter Wolf Biermann.

Keep quiet
I won’t keep quiet,
as long as injustice speaks,
the ground is wet with blood
look, they shot them dead.

Just keep quiet
I won’t keep quiet,
as long as injustice speaks,
every morning is night,
their hatred will be sent,
by us, on a verdant voyage.

Wolfgang Welsch was twenty years old when he was arrested by the East German Stasi for attempting to escape to West Germany and for “incitement hostile to the state” (the charge for reading his poetry in public). In 1970, six years into his imprisonment, a message he’d written on a cigarette paper was smuggled out of prison, eventually making its way to the Leeds Amnesty International group in the United Kingdom. Welsch was released from prison on March 24, 1971, after months of international pressure. 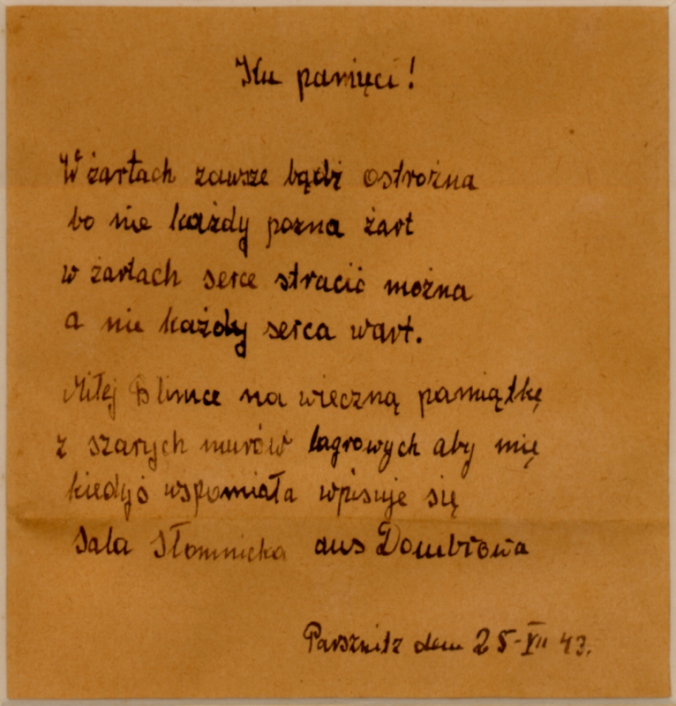 With a joke always be careful
Because not everyone will recognize a joke
In a joke you could lose your heart.

Dear Blemka, to remember forever
From the old walls of the camp
Think of me sometimes
As I’m writing to you
Sala Slomnicki from Dombrowa

Born in 1928, Sala (Sally) Slomnicki was living with her parents, brother, and four sisters in Dombrowa Gornicza, Poland, when the German army invaded. Sala’s family was confined to the nearby Będzin ghetto until 1941, when her brother and father were arrested and killed (Sala’s father was beheaded at the Katowice prison camp on September 18, 1942). In August 1942, Sala was confined to the Parschnitz (Gross-Rosen) concentration camp. Her two older sisters remained as workers in Będzin. Her two younger sisters and mother were sent to Auschwitz, where they were subsequently murdered. The Soviet Army liberated Parschnitz in May 1945. In August 1947, Sala emigrated to the U.S. on board the ship Ernie Pyle. She met Leo Birnholz on board; they married December 9, 1950.